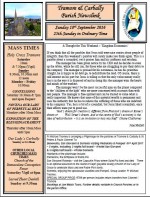 A Thought for This Weekend – ‘Kingdom Economics’

If you think that all the parables that Jesus told were nice stories about people of integrity, then this weekend’s parable will surely make you think again. This is a parable about a scoundrel, yet it praises him and his craftiness and wisdom.

The manager has been given notice by his CEO and he decides to even up the tables, while he still can, for those who are struggling to pay their debts to the company. The manager is praised for his astuteness, he has his priorities straight, he is happy to let debt go, to redistribute the load. Of course, there is self-interest on his part but Jesus is telling us that the only value money really has is in the way it is disposed of and in doing this the manager wins the hearts and minds of the workers.

The manager won’t be the most successful man on the planet compared to the ‘children of the light’ who are more concerned with accounts than with real people. The manager is free-spirited and can be trusted to value what is really important. He knows that none of this material wealth is permanent and uses the authority that he has to relieve the suffering of those who are indebted to his company. Yes, he is a bit of a scoundrel, but Jesus liked scoundrels, once their efforts were put to good use.

‘God’s dream for creation is different from Pharaoh’s dream or Rome’s dream or Wall Street’s dream. And at the centre of God’s economy is the idea of redistribution – it is an invitation to holy mischief!’ (Shane Claiborne)