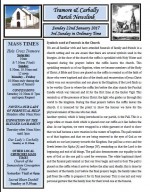 Symbols used at Funerals in the Church

We are all familiar with and have attended funerals of family and friends in a church setting and we are aware that there are several symbols used in the liturgies. At the door of the church the coffin is sprinkled with Holy Water and repeated during the prayers before the coffin leaves the church. This sprinkling reminds us of our Baptism, when we became members of the Body of Christ. A Bible and Cross are placed on the coffin to remind us of the faith of those who were baptised and also of the death and resurrection of Jesus Christ which won our resurrection and our place in the Kingdom, if the Lord finds us to be worthy. Close to where the coffin lies before the altar stands the Paschal Candle which was blessed and lit for the first time at the Easter Vigil. This reminds us of the presence of Jesus Christ, the light who guides us through this world to the kingdom. During the final prayers before the coffin leaves the church, it is incensed by the priest to show the honour we have for the physical remains of the one who has died.

Another symbol, which is being introduced in our parish, is the Pall. This is a large white or cream cloth which is placed over our coffin as it lies before the altar. At our baptism, we were wrapped in a white garment or shawl to show that we had become a new creation in the waters of baptism. The pall reminds us of that baptism and that we are being renewed in the eyes of God as we embark on our last journey towards the Kingdom. Our pall has a cross and the Greek letters for Alpha (A) and Omega (W), reminding us that the Lord is the beginning and end of all things. The pall also demonstrates our equality in the eyes of God as the one pall is used for everyone. The white baptismal shawl and the funeral pall remind us that our lives begin and end in God. The pall is placed on the coffin when it arrives before the altar and, ideally, this is done by members of the family. Just before the final prayers begin, the family takes the pall from the coffin to prepare it for its final journey. This is one last and very personal gesture that the family does for their loved one at the funeral.