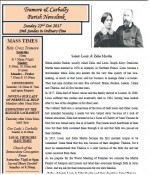 Marie-Azélie Guérin, usually called Zélie, and Louis Joseph Aloys Stanislaus Martin were married in 1858 in Alençon, in Northern France. Louis became a watchmaker while Zélie was known for the very fine quality of her lace-making, so much so that Louis sold his business to manage Zélie’s accounts. They had nine children but only five survived: Marie, Pauline, Léonie, Céline and Thérèse, and all five became nuns.

In 1877, Zélie died of breast cancer and the family moved to Lisieux. In 1889, Louis suffered two strokes and eventually died in 1894, having been looked after by two of his daughters in his final years.

The Catholic faith was a cornerstone of the lives of both Louis and Zélie: Louis had intended becoming a monk but was turned away because of a lack of formal education; Zélie had wanted to be a Sister of Charity of Saint Vincent de Paul but was turned away due to ill health. They knew much heartbreak in their lives but their faith sustained them through it all and that faith was passed on their children.

In 2015, Louis and Zélie Martin became the first married couple to be canonized. Some think that this was because of their daughter, Thérèse, but it must be remembered that Thérèse is a saint because of the faith she and her sisters received from them.

As we prepare for the World Meeting of Families we consider the Martin Family of Alençon and Lisieux and what they overcame through faith in Jesus Christ, and we ask for their intercession for our own families.

Relics of Saints Louis & Zélie Martin and their daughter, Saint Thérèse (The Little Flower), will be in Holy Cross Church, Tramore, for a Eucharistic celebration at 12.00 noon on Sunday, October 29.