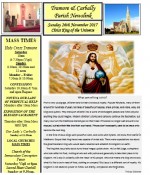 What sort of king is this?

From a very young age, children tend to hear a lot about royalty. Popular fairytales, many of them around for hundreds of years, tell tales of beautiful princesses, brave princes, and noble, wise, old kings and queens. They transport children into a world of extravagant palaces and riches beyond anything they could imagine. Modern children’s stories and cartoons continue the fascination, but many now turn the traditional stereotypes on their head. Princesses no longer wait around to be rescued, but take their fate into their own hands. Princes don’t necessarily want to be brave or to become the next king.

In the time of Jesus kings were powerful rulers, and some were tyrants. We know from earlier in Matthew’s Gospel that King Herod was capable of brutal acts. There were expectations too about the great Messianic King who would lead a rebellion and establish his kingdom on earth.

The king that Jesus talks about turns these images upside down. He is a fair judge, a shepherd who looks after his flock, inviting all who act with justice and generosity to take their place in his kingdom. He is also in solidarity with the ‘least’ of his people. Who ever heard of a king who knows what it’s like to be in need of food, clothing or company? But Jesus is a different sort of royalty. His kingdom is not based on power or riches, but charity, compassion and forgiveness.