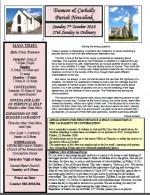 Today’s gospel is challenging. It contains two instances of Jesus correcting a popular opinion of the time and offering an alternative way.

The first is one of the few times Jesus is presented as speaking about marriage. The question asked by the Pharisees is whether it is ‘against the Law’ for a man to divorce his wife. Note that they do not ask whether divorce is right, or just – only whether it is legal. They are testing Jesus of course. They know the answer and so does he: divorce was indeed allowed under the law. Divorce was relatively common in the society of the time, though there were different interpretations of the law.

But Jesus, as always, is less concerned about the law than the rightness of a situation. He directs his questioners instead to God’s plan for marriage and the unity between a married couple. When he delivers his strongest words about divorce, it is in the context of adultery; the sin is not the breaking of the legal agreement, but the betrayal of one’s spouse. The Pharisees are asking the wrong question.

The second part of the gospel sees Jesus once again teaching people to look at things in a new way. Children at the time of Jesus, not unlike wives, were often viewed as property, without any rights of their own. The disciples fail to show any concern for them when they turn them away. But Jesus welcomes them, blesses them, and treats them with love and concern. He goes so far as to present them as teachers, on account of their faith and openness. Another surprising attitude!