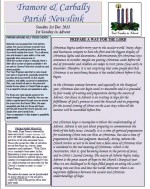 PREPARE A WAY FOR THE LORD

Christmas begins earlier every year in the secular world. Many shops and businesses compete to have the first and the biggest display of Christmas lights and decorations. Advertisements for Christmas toys commence in October. People are posting Christmas cards before the end of November and children are taken to visit Santa Claus early in December. Therefore, it is not surprising that some people feel that Christmas is an anticlimax because it has ended almost before it has begun.

In the Christian context however, and especially in the liturgical year, Christmas does not begin until 25 December and it is preceded by four weeks of waiting and preparation during the season of Advent. Our focus in Advent is on waiting in hope for the fulfillment of God’s promise to send the Messiah and on preparing for the Second Coming of Christ on the Last Day when all the nations will be assembled before him.

Our Christian hope is incomplete without this understanding of Advent. Advent is not just about preparing to commemorate the

birth of the baby Jesus. Crucially, it is a time of spiritual preparation for welcoming Christ into our lives at Christmas, but also a time of preparation for the last judgment. Basically, during Advent the Church invites us not to be lured into a false sense of Christmas that is unrelated to the real meaning of Christmas, which is the Incarnation, that is, God becoming human in the person of Jesus,

and to Christ’s Second Coming. The season of Advent begins today. Advent is the great season of hope in the Church’s liturgical year. Thus we are challenged to be hope-filled people awaiting the Lord’s coming into our lives and into the world. However, there is an important difference between the secular and Christian understandings of hope.