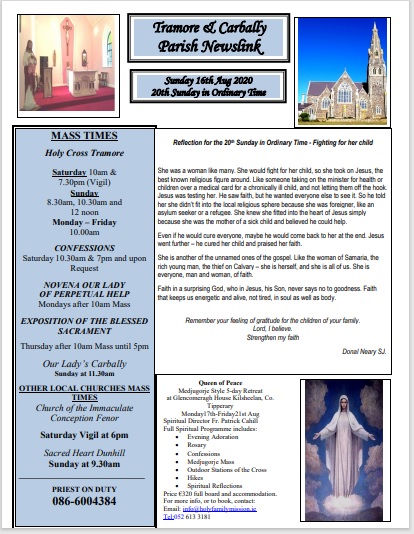 She was a woman like many. She would fight for her child, so she took on Jesus, the best known religious figure around. Like someone taking on the minister for health or children over a medical card for a chronically ill child, and not letting them off the hook. Jesus was testing her. He saw faith, but he wanted ev¬eryone else to see it. So he told her she didn’t fit into the local re¬ligious sphere because she was foreigner, like an asylum seeker or a refugee. She knew she fitted into the heart of Jesus simply because she was the mother of a sick child and believed he could help.
Even if he would cure everyone, maybe he would come back to her at the end. Jesus went further – he cured her child and praised her faith. She is another of the unnamed ones of the gospel. Like the woman of Samaria, the rich young man, the thief on Calvary – she is herself, and she is all of us. She is everyone, man and woman, of faith.
Faith in a surprising God, who in Jesus, his Son, never says no to goodness.

Faith that keeps us energetic and alive, not tired, in soul as well as body.
Remember your feeling of gratitude for the children of your family. Lord, I believe. Strengthen my faith

The annual Youth 2000 Summer Festival is Ireland’s largest Catholic Youth event, but this year, for the first time, it will be streamed live on the 14th-16th of August. Hear talks and workshops from some of the best Catholic speakers including Fr. John Harris OP, Dr. Scott Hahn, John Pridmore, Petroc Willey (University of Steubenville), Katie Ascough, Sr. Colleen Mattingly, Sr. Mary Hanrahan, Bill Keimig (University of Steubenville), Beth Davis (Blessed is She) and others from Ireland and around the world.
Youth 2000 Ireland ‘s motto is ‘Youth leading Youth to the Heart of the Church’ and we do this by leading Eucharistic-centred festivals, retreats and prayer meetings throughout the country.
Register FREE at www.youth2000.ie/summerfestival2020

Congratulations to their parents and godparents.