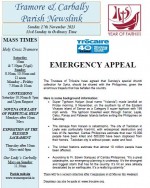 The Trustees of Trócaire have agreed that Sunday’s special church collection for Syria, should be shared with the Philippines, given the enormous tragedy that has befallen the country.

Here is some background information:

• Super Typhoon Haiyan (local name “Yolanda”) made landfall on Friday morning, 8 November, on the southern tip of the Eastern Visayas island of Samar as a Category 5 super typhoon with 195 mph winds. The typhoon travelled west through Samar, Leyte, Cebu, Panay and Palawan Islands before exiting the Philippines on Saturday.

• The damage from Haiyan is catastrophic. The city of Tacloban in Leyte was particularly hard-hit, with widespread destruction and loss of life reported. Caritas Philippines estimate that over 10,000 people have been killed and 600,000 have been displaced from their homes. Tacloban city is without power, water and food.

• The United Nations estimate that almost 10 million people have been affected.

• According to Fr. Edwin Gariguez of Caritas Philippines: “It’s a great catastrophe, our emergency planning is underway. It’s the strongest and biggest storm that has hit the country. It’s hit an area already devastated by an earthquake. It’s a really big calamity.”

There will be a second collection after Communion at all Masses this weekend.

Donations can also be made at: www.trocaire.org.