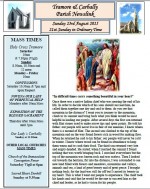 “In difficult times carry something beautiful in your heart”

Once there was a native Indian chief who was nearing the end of his life. In order to decide which of his sons should succeed him, he called them together one day and said to them: do you see that mountain in the distance? I want you to journey to the mountain, climb to its summit and bring back what you think would be most helpful in leading our people. After several days the first son returned with flint stones used to make arrow tips and spear points. He told his father: our people will never live in fear of our enemies; I know where there is a mound of flint. The second son climbed to the top of the mountain and on the way found forests rich in wood for making fires. When he returned he said to his father: our people will never be cold in winter. I know where wood can be found in abundance to keep them warm and to cook their food. The third son returned very late and empty-handed. He stated; when I reached the summit I found nothing that was worth bringing back. I searched everywhere but the top of the mountain was barren rock and was useless. Then I looked out towards the horizon, far into the distance, I was astounded to see new land filled with forests and meadows, mountains and valleys, animals and sea, a land of great beauty and of great peace. I brought nothing back; for the land was still far off but I carried its beauty in my heart. This is what I want our people to experience. The chief took his hands and said that he would be the one to succeed him as the chief and leader, as he had a vision for his people.